Douglas Adams‘s 1982 novel Life, the Universe and Everything (in The Hitchhiker’s Guide to the Galaxy comedy science fiction series) introduces the idea of an “SEP field” as a kind of cloaking device. The character Ford Prefect says,

An SEP is something we can’t see, or don’t see, or our brain doesn’t let us see, because we think that it’s somebody else’s problem. That’s what SEP means. Somebody Else’s Problem. The brain just edits it out, it’s like a blind spot.

The narration then explains:

The Somebody Else’s Problem field… relies on people’s natural predisposition not to see anything they don’t want to, weren’t expecting, or can’t explain. If Effrafax had painted the mountain pink and erected a cheap and simple Somebody Else’s Problem field on it, then people would have walked past the mountain, round it, even over it, and simply never have noticed that the thing was there.

I’m mentally exploring the connection between this as a result of the balance between defining a role clearly to help individuals understand what to do while also not defining it too rigid so that you limit learning, exploration and play. The reason for this is because the way the organisation looks and operates today is how it has been designed. In many cases not entirely deliberate, but nevertheless designed.

If we look at the quadrant below on the left, we desire a high level of autonomy and a high level of alignment to operate in the quadrant that will make the organization suitable to deal with and solve complex problems. I would consider the effects of an increasing level of role description to make you wander according to the quadrant on the right. 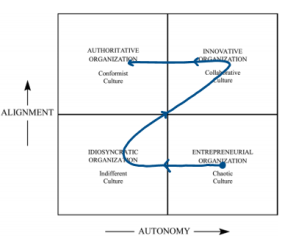 The arrows indicate the direction with an increasing level of description, i.e. more detailed description. Even though we travel on both dimensions, autonomy and alignment, I would argue that given a constant level of alignment this is the effect from adjusting the level of detail in role descriptions. Indicating that you need to find the “Sweet Spot” to stay within the desired quadrant. There will certainly be a complex interplay between variables to make this balancing act even more difficult.

If you have a complex system, computational complexity theory has shown that a very good way to quickly learn as a new agent in the system is through imitation learning, mimicking other agents’ behaviors. This emphasizes the importance of role models, since organizations are complex systems consisting of people.

Also considering Linus’s law: “given enough eyeballs all bugs are shallow”. Which refers to Linus Torvalds saying that any software bug will be understood and solved if you allow enough people to look at it, which is a core principle behind open source code. What does this have to do with organizations? Software are complex adaptive systems, like organizations. The problems organizations face is of a complex nature and the same level of diversity is needed to come up with the best solutions at any given moment, within the context the organization is operating, same as with making software bugs shallow.

To enable this to happen (deliberate choice of words) you need to create the environment where the likelihood of it happening is as high as possible, i.e. designing your organization and the behaviors within. An important aspect of this is the role descriptions. Role descriptions that allow for diversity in behaviour and promote role models. Not seeking compliance and conformity.

I will consider this my intellectual kick-off for 2020 and also a reminder for myself that I should be better with references.